How Does Anti-Lock Braking Work

A simple Anti Lock Braking (ABS/ALB) system is designed shorten braking distance and prevent the car going into a skid so that the driver doesn't lose control of the vehicle under braking. It uses an ECU (Electronic Control Unit) to monitor the brake pedal and the wheel speed of each wheel. A pump unit and valve body is used to release hydraulic brake pressure from the appropriate brake line in the event that one or more wheels lock up under braking. For the ABS ECU to activate the pump it only needs to sense the brake pedal is being depressed, and one or more wheels are locking up. This can happen under very light braking as well as under heavy emergency braking. The harder the the brake pedal is being pushed, the stronger the vibration of the pump activting will be felt through the brake pedal, and the louder the sound of the pump. It's important to note that most simple ABS systems do not apply the brakes but rely on the driver pushing hard on the pedal in an emergency situation for brake pressure. Most simple systems only take brake pressure away from the wheel, they do not apply it.

How Does Traction Control Work

Anti lock braking systems have evolved from a system to just stop wheels from locking up under braking to now incorporate traction control and even stability control. Basic traction control systems actively apply the brakes on the driving wheel that is slipping under acceleration, while other systems will electronically close the throttle of the engine, reducing torque to the driving wheels as well. On many systems the driver can manually turn traction control on and off by a switch on the dashboard.

How does Stability Control Work

Stability control systems activate the brakes on different wheels to prevent the vehicle from fish tailing or going into a spin. This system uses a steering wheel position sensor and and YAW sensor in addition to the ABS system. The steering position sensor tells the ECU on what path the vehicle should be traveling, and the YAW sensor tells the ECU whether the vehicle is acutally following the intended path. If the ECU senses that it is not, it will apply and release brakes on individual wheels to pull the vehicle back into line. These systems have dramatically increased safety on modern motor vehicles, reducing fatal single vehicle crashes in SUV's alone by over 50%.

When The Warning Light Stays On

Warnings lights always come on for a reason, the first step is to find out what fault codes the ECU has recorded. This usually involves attaching a scan tool to the cars diagnostic port and communicating with the ECU. The data obtained from the ECU will normally point to the circuits that have caused the fault.

The next step is to then test the circuit until the fault is located and repaired or the faulty parts are replaced. Testing usually requires specialist diagnostic equipment. Khandallah Garage has the equipment and trained techicians to carry out the diagnosis and repairs on most makes and models of cars. 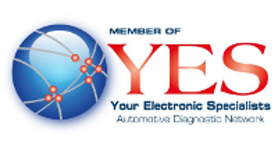